Tara Gower is a proud Yawuru woman from Broome, who also has Spanish, Filipino and Irish ancestry. Tara 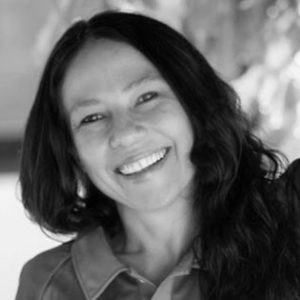 believes growing up on Yawuru Country gives her the strength to pursue her dreams into reality.

Tara recently returned home to the Kimberley after pursuing a successful career as a professional dancer with Bangarra Dance Theatre spanning over 15 years. Highlights included performing in New York, Paris, London, but the most significant of all being able to return home and perform for her family and being nominated in Dance Australia’s Critic Choice Awards as Dancer to Watch.

Tara won an award this year for best new movement director from Performing Arts WA, after choreographing the latest version of Jimmy Chi’s musical Bran Nue Dae in 2020, produced by Opera Australia. She created her first choreographic work Nala, for Bangarra’s Dance Clan 3 in 2013 which later returned to Country, performed in her hometown of Broome on Cable Beach.

Tara recently choreographed Burrb Waanggarraju Nurlu for A Taste Of Broome showcasing emerging musicians and dance artists under Goolarri Media’s Youth Leadership program. She currently continues to work at Goolarri Media, whilst also pursuing her dance program for all ages as a freelance dance artist and choreographer.